Part 6 (Not By Me but by another Teacher of My Student)
http://www.slideshare.net/ambarishsrivastavasr/iit-jee-physics-class-notes-uploaded-by-er-ambarish-srivastava-air-538
Posted by Ambarish Srivastava at 12:12 AM 17 comments:

8 Selections in Latest KVPY, Highest in the City!!!
Read Full Post to see the details (photographs of Selected Students).... 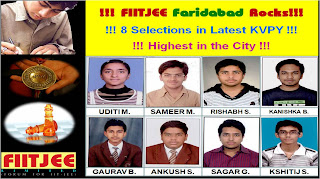 Posted by Ambarish Srivastava at 7:00 AM 9 comments:

FIITJEE Faridabad Vs VMC (Founder/ Extremex) How to decide

Are you staying at Faridabad and in a dilemma about making the right choice regarding selection of a coaching program? Read on.....
(Disclaimer: You may always accuse me of being partial since I AM an employee of FIITJEE Limited (And proudly so for being associated with a team of bright and enthusiastic faculty members and students))

Here are some questions/ facts to be considered:

1. VMC was once a great brand where the three brothers themselves used to teach , however last year they have sold out to Educomp. So is VMC now still the same VMC or  has gone in to commercialization and encashing the brand image? It opened 22 centers simultaneously. Will it be realistically possible for the brothers to take classes at all these centers?

3. FIITJEE Faridabad has produced excellent results in the very first year of its operations. In a small lot that the center had for the first year, It has 4 selections in RMO/GMO (Practically half the results from Faridabad). (It is Worth mentioning that in GMO only two students had qualified from faridabad and both students are from FIITJEE Faridabad besides there was also another student in RMO who was from FIITJEE Kalu Sarai).

5. In NSEJS (First stage of Junior Science Olympiad), out of a total of 6 students selected from entire Haryana, 3 are fiitjee students (2 regular students and 1 from special NSEJS support sessions).

6. It is a general experience of students that FIITJEE Faridabad teachers are very caring and cooperative. So many students take so much extra contact time from Faculty for clearing of their doubts and faculty are always ready in their service. Is it even possible for a Student going to Punjabi Bagh on weekends to Clarify his doubts in the weekdays. Can one run all the way from Faridabad to Punjabi Bagh?

7. A few years back in the regular classroom program out of 15000 students (who appeared in their test), VMC has selected about 200 students. That means that statistically , this test was significantly more tough (or competitive) as compared to IIT JEE (8900 selections out of 4.7 lac). So, out of these, students, the expected selection rate in IIT JEE must be 100% ....  Was it really 100%? ... No. it was about 60% (Yes! You read it right! From regular, not ECC.) (That too when they would move some of the relatively low scoring students  from the regular batch to correspondence (thus reducing the denominator)).

So What should I do?
Of course,  as a career conscious student (or parent of a student) you should doubt everything that I (or for that matter anybody else) might say and do an independent research. Ask the already studying students (who are taking coaching) and their parents : if they are satisfied... If they really feel cared for... If their doubts are addressed.... It's a matter of your career so please do make an informed decision.
God Bless!
Wishing you all the best,
-Ambarish Srivastava
(Professor of Physics @ FIITJEE Faridabad, AIR-538
(IIT JEE 1995), B.Tech. (Mechanical Engg. IITD)
Posted by Ambarish Srivastava at 3:52 AM 1 comment:

The syllabus below is copied from HBCSE website and additional topics are highlighted red. If there are any comments I have used a green font for them.

1] Candidates must be aware that instruments affect measurements.
2] Knowledge of the most common experimental techniques for measuring physical quantities mentioned in Part A.
3] Knowledge of commonly used simple laboratory instruments and devices such as calipers, thermometers, simple volt-, ohm- and ammeters, potentiometers, diodes, transistors, simple optical devices and so on.
4] Ability to use, with the help of proper instruction, some sophisticated instruments and devices such as double-beam oscilloscope, counter, ratemeter, signal and function generators, analog-to-digital converter connected to a computer, amplifier, integrator, differentiator, power supply, universal (analog and digital) volt-, ohm- and ammeters.
5] Proper identification of error sources and estimation of their influence on the final result(s).
6]Absolute and relative errors, accuracy of measuring instruments, error of a single measurement, error of a series of measurements, error of a quantity given as a function of measured quantities.
7] Transformation of a dependence to the linear form by appropriate choice of variables and fitting a straight line to experimental points.
8] Proper use of the graph paper with different scales (for example polar and logarithmic papers).
9] Correct rounding off and expressing the final result(s) and error(s) with correct number of significant digits.
10] Standard knowledge of safety in laboratory work. (Nevertheless, if the experimental set-up contains any safety hazards the appropriate warnings should be included into the text of the problem.)

A hinged construction consists of three rhombs with the ratio of sides 3:2:1 (Fig.) Vertex A3 moves in the horizontal direction at a velocity v. Determine the velocities of vertices A1, A2, and B2 at the instant when the angles of the construction are 90 degrees. 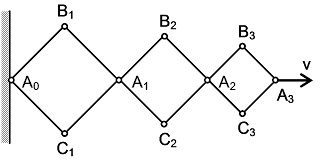 You can submit your answers in comments. The students with correct answers will be listed in the winners link at the top of the blog
Posted by Ambarish Srivastava at 2:01 AM 11 comments:

On a certain rough horizontal circular track of Radius R having a constant coefficient of friction, the maximum attainable speed for a cyclist is vo. A cyclist begins to ride on this track in such a manner as to attain the maximum possible speed in shortest possible time. What will be ratio of his initial tangential acceleration to his tangential acceleration at an instant when he  attains a speed of vo/η
Posted by Ambarish Srivastava at 9:16 AM 5 comments:

Solution to the weekly challenge 2

The Original Challenge Problem can be found here:


Solution to the Weekly Challenge 2
Posted by Ambarish Srivastava at 8:34 AM No comments:

A projectile is fired from the top of a tower whose height is unknown. It is found that for a  projection speed of 10m/s , the maximum range is obtained at a projection angle of 30o.What is the maximum range (i.e. from foot of the tower to the landing point on ground) and what is the height of the Tower?
Posted by Ambarish Srivastava at 10:25 PM 6 comments:

Solution to the Weekly Challenge 1

Solution to the Weekly Challenge 1
Posted by Ambarish Srivastava at 8:30 PM No comments:

Online quiz on kinematics, Laws of Motion and Work Power and Energy

Instructions (Read Carefully):
1.  The quiz will load on this page. Solve all the questions and keep your answers ready on a sheet of paper before copying them to Virtual OMR for instant grading.
2. To get a better  view  of the quiz, you may  want to use full screen (at top of the quiz frame) and zoom options (at the bottom of the quiz frame) for the embedded quiz
3. After Completing Your Quiz You Should mark your answers on virtual OMR  here
4. After filling the OMR you will be graded instantly by hitting "show me my marks" button
5. To See the Answer Key, You can click here
6. To Time the Test, if you like you can use the following Timer


Online Quiz on Work Power Kinematics_ and Laws of Motion
Posted by Ambarish Srivastava at 9:56 AM 2 comments:

http://ncertbooks.prashanthellina.com/
Posted by Ambarish Srivastava at 12:40 AM No comments: